AllianceMillworkBlogNewsWhat are dovetail drawers and what is their construction
04.01.2023 Alex 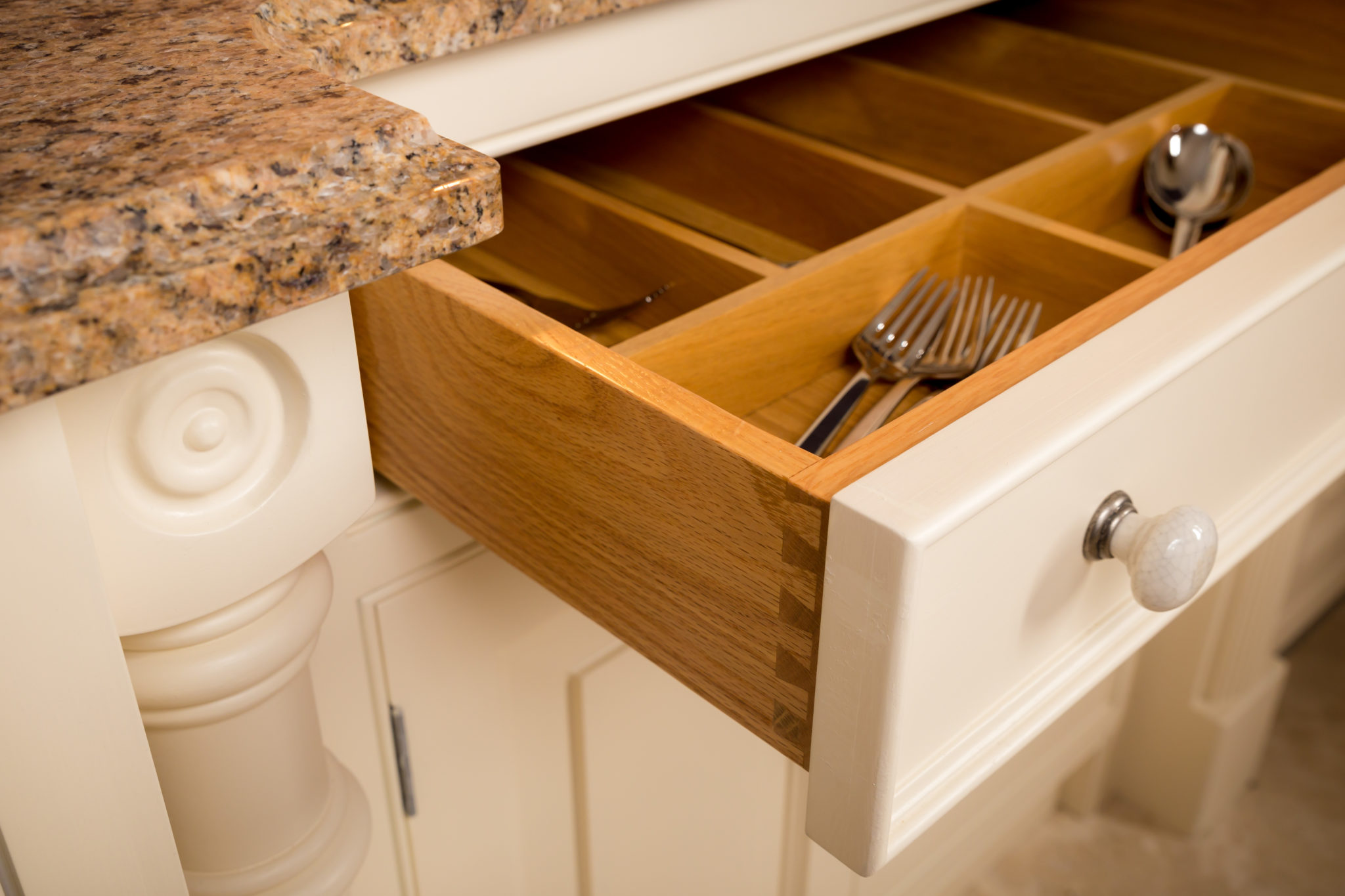 Modern technologies offer a wide variety of furniture with a specific design, mounting options and other features. Drawers with a front wall, which are used in cabinets, chests of drawers, kitchen furniture, etc., can also differ in design variations. You can find such connections of the walls of the box in modern furniture:

It is believed that the dovetail drawer joints is such that each part of the drawer walls has a kind of “thread”. One wall should contain recesses, the so-called series of “pins”, and the other – the convex parts of the series “tails”. In other words, the elongated part fits into the corresponding groove.

Everyone can understand what does dovetail drawers mean, just by looking at the attachment feature in them. When constructing a box, the walls with opposite series are in contact, “tails” enter the recesses. Visually, it looks like the corner of the box does not just consist of two parts, but they are intertwined with each other. Such a “thread” has a trapezoidal shape so that the parts of the box hold tightly together.

The Benefits of Dovetail Drawersм

Today, the dovetail drawer construction has several advantages, which is why it is often used in modern and even exclusive types of furniture. The first thing that can be distinguished is the aesthetic side. When you open the drawer, you can see an interesting type of connection. The second is good fixation. The walls of the box with spikes and grooves not only fit into each other, they are additionally glued. This method is considered reliable and allows the box to last longer. The third advantage is the absence of natural deformation of the wood at the joints. Fourth – cracks are extremely rare. 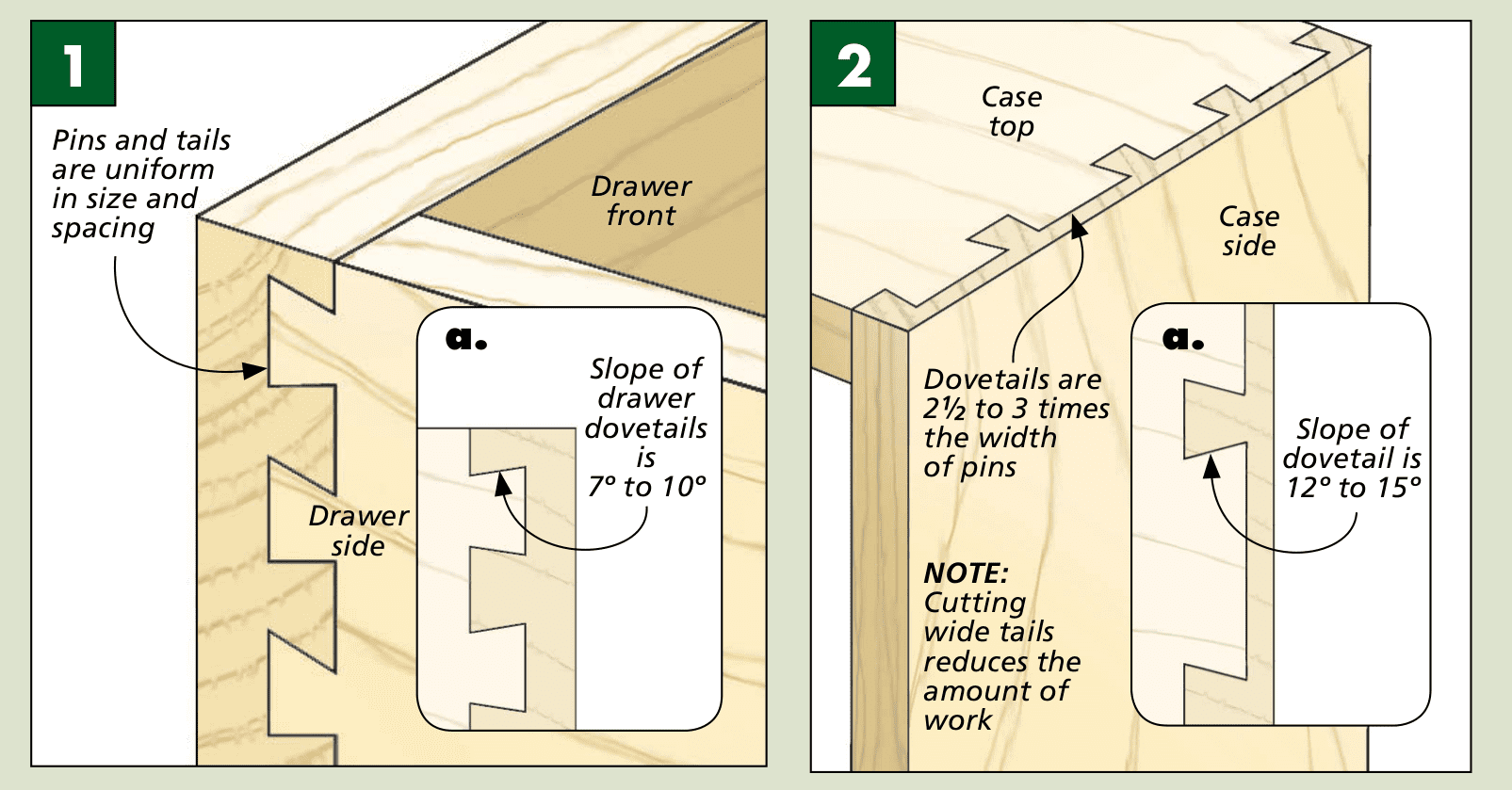 The entire dovetail joint drawer construction includes several parts with different wall shapes, a bottom, a top bar or an inner one for attaching a handle. “Dovetail” is used mainly in wooden drawers. In this case, a different type of wood is involved – both soft breeds and harder ones.

When materials for boxes are being prepared by carpenters, the required number of grooves and tails are cut on the walls of the box in accordance with its size and material. It may be that the front wall of the box has the same “thread” on both sides or the opposite.

Today, the English dovetail drawer construction has many similar but modified fastening methods. All of them are based on spikes and grooves, but the connection process itself, the method and shape for the bevels may differ. In essence, the dovetail is preserved, but it is either hidden or simplified.

The usual cabinet dovetail joint is used most often in modern and especially simple types of furniture. Two walls with a side of “tails” and “grooves” are used, fastened together and additionally glued. This method can also form large furniture (wall cabinets, kitchens, etc.).

In this case, the part with grooves hides them from the inside. When the box is opened, the type of connection is not visible inside, it can only be detected from the outside. The tails are inserted into the grooves in the usual way.

This type is used in corner mounts and is completely hidden from humans. The two wooden parts of the box have tenons and grooves, but their shape is bevelled. When such walls are connected, the grooves are filled and just the corner of the box is entered without the form of its fastening.

There is a way to mount at a right angle. It’s easy to figure out what is a dovetail dresser with such a mount mean: there are two parts, one of which, with a sliding movement of the tail, enters the long groove of the other.

Why Is a Dovetail Joint Good For Drawers?

Distinguishing the features of the possible types of fasteners in the boxes is quite simple. It is important to understand what are dovetail drawers is, a separate drawer or a whole closet. All of them consist of walls that are fastened together not mechanically, but by entering special-shaped spikes into the grooves. This method is considered much stronger and more durable.